Do you mean this yellow wire?
I thought that fed the injectors, so I snipped it, 'cos I don't have any... Never mind, is easy enough to stick a bit back on. 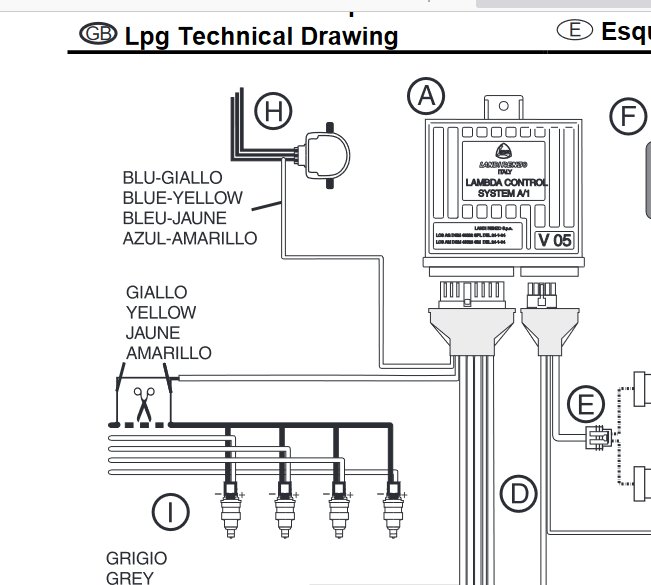 Bench testing would have been a good idea...

The yellow wires on most closed loop mixer system electronics won't be able to account properly for float bowl emptying time or priming time. The time it takes for a float bowl to prime can be roughly guestimated (though may be engine rpm dependent if the engine has a conventional fuel pump as opposed to an electric fuel pump) but the time it takes for a float bowl to empty (when not being topped up with petrol from the petrol tank) will depend very much on the engine load (gallons per hour the engine is using)... The driver needs to be in control of when the gas turns on after turning supply of petrol to the float bowl off, it's no good just setting a time in software. Without direct driver control of switching on a carb system the engine will run extremely rough or stall due to either getting no fuel when the float bowl is empty before the gas solenoids open or getting twice as much fuel as it should when the float bowl still has petrol and the gas solenoids are open.

Is this Landirenzo ECU the same as an AEB175 (which doesn't have the no-fuel provision) or is it a different ECU that does have the provision? The provision would usually involve a 3 way rocker switch or a pushbutton switch that switches between: 1 petrol no gas, 2 no fuel at all (drain carb float bowl before switching to gas), 3 gas no petrol. Other options may include the ability to set a period of time during which the engine gets both fuels (priming time switching from 3 back to 1), etc, but priming time settings are not really needed with manual control of switching, they are more useful on a fuel injected engine with a closed loop mixer system and even then are seldom used.

If the Landirenzo ECU / switch doesn't have a 'no fuel' setting the way to install it is to add your own 3 way rocker switch and leave the Landirenzo switch set to gas, forget yellow wires. The rocker switch would be wired so pos1 = petrol (only power to the petrol solenoid), 2 = no fuel (no power to petrol solenoid or gas system), 3 = power to the gas system... The gas system switch would be left permanently set to gas and if it were ever accidentally switched to petrol it would effectively be the same as setting the additional switch to pos 2 (no fuel). * Edit - But there can be a problem with abruptly disconnecting / connecting power to a closed loop mixer system LPG ECU depending on the type of ECU... On some closed loop mixer systems the following points are true... If the LPG ECU has power abruptly disconnected before the system is switched from gas to petrol the stepper motor will stay in whatever partly open position it was at when the power was abruptly disconnected. Normally the stepper motor would be closed completely when the system is switched from gas to petrol when power to the ECU is present. The ECU assumes the stepper motor is closed when it first starts to run on LPG (from either being switched from petrol to LPG with power present, or if the system is set to start on gas regardless of power present or not). Closed is the reference point from which the ECU counts opening steps, so if power was abruptly disconnected while it was running on gas the stepper motor can stay in whatever position it was in when power was abruptly disconnected and then next time power is connected the ECU might assume the stepper motor is closed when really it is partly open. This can cause all sorts of problems for a system which won't try to close the stepper more than what it believes is the fully closed position, won't try to open the stepper more than what it believes is the fully open position, will move the stepper back to what it believes is the 'default' position (closed + X steps open) whenever the driver moves the throttle (if a TPS is connected) and/or with changing RPM. The ECU doesn't try to open the stepper more than what it believes is full open position because it is possible to damage some steppers by over-opening them by pulling the plunger off the end of the stepper. On some systems setting software settings to 'start on gas' will prevent all these problems because doing so makes the ECU initially close the stepper (to find the closed reference point) before starting normal operation (moving the stepper to the default position for engine starting). If the Landirenzo doesn't initially close the stepper you'd have to have both the additional switch and the Landirenzo switch accessible by the driver and wire the Landirenzo ECU so it gets power anytime the ignition is on, and switching between fuels would involve moving both switches.

Not enough info on the Landirezo, but some early BRC closed loop mixer system electronics use a 3 way rocker switch with pos 2 = no fuel so do have the provision/ability to be able to be fitted to a carb engine without involving an additional switch. And obviously all open loop carb LPG switches have the pos 2... Instead of a none LPG specific rocker switch could fit an open loop mixer system 3 way switch and use the yellow wire from that to control the petrol solenoid, blue wire from that to power the Landirenzo or AEB175, then you'd only need to install one switch on the dash because the carb switch would have the LPG fuel gauge, the Landirenzo switch could be hidden behind the dash. * Edit - Again using only one switch only possible on some single point closed loop systems when fitted to a carb engine as per above paragraph - to be able to use only one switch the closed loop system must close the stepper before switching to gas to have that closed reference point.

Sometimes when a closed loop mixer system is fitted on a carb engine the point at which the driver should turn on the gas during running the carb float bowl dry is slightly earlier than the point at which would be ideal for switching to gas for an open loop system, to allow time for the stepper motor to get into the correct position (especially if it has to close before moving into the correct position).
Full time LPG installer
Servicing / Diagnostics / Repairs to all systems / DIY conversion kits supplied with thorough tech support
Mid Yorkshire
2 miles A1, 8 miles M62,
http://www.Lpgc.co.uk
Twitter https://twitter.com/AutogasSimon
07816237240
Top

Well all of the bits have arrived, but the software isn't talking to the machine...
As far as we can tell, it isn't even trying: we've put a scope on the wire and see no sign of a signal.
In contrast, if squirt data down the serial port with a terminal, then we do see a signal.

Can't see any way to set any configuration for the software...
Top

What com port has windows allocated to your lead (assuming its usb rather than serial). Usually the older software will scan com1-4 but not look any higher. Though that particuar software may only look to com1. Its not exactly giving a lot of options to set anything much up as far as i can see.

if your using a physical com port then I'd expect it to work, given your able to send data down to it using terminal.

What error does it give when you try to connect? i get impossible to connect check connection (Err Code c01) with nothing plugged into it. Thats from right clicking the car configuration screen.
Top

It's on Com14.
Maybe I'll try the Linux version... or did I imagine seeing that one?
I'll get back to you on the error code.
Top

The dealer for the interface pointed me here: https://ccy.pl/en/
Top

OK, I've changed it to COM1, and the lights flash, so that's progress at least...
Error code C01
Top

That may indicate the wrong software, or you dont have the ECU is not in the right state to connect. Or wrong pinout on the lead is possible too.

ECU will typically need the switched live to be on to connect.

Landi usually wants the standard aeb pinout rather than the alternate one stag and kme use with the same connectors.

Probably best to confirm which cable you have?
Top

Brian_H wrote: ↑
Fri Jun 11, 2021 7:04 pm
That may indicate the wrong software, or you dont have the ECU is not in the right state to connect. Or wrong pinout on the lead is possible too.

I've tried a few bits of software, nothing so far.
There's only 4 wires in the lead, and only three are connected. One of these is earth, so that only really leaves two ways around and I've tried both.


ECU will typically need the switched live to be on to connect.

I had assumed that, although I have forgotten once or twice...

Landi usually wants the standard aeb pinout rather than the alternate one stag and kme use with the same connectors.

Probably best to confirm which cable you have?

This is the cable:
https://lpg.auto.pl/en/index.php?s=info&id=2369
I'm not clear what you mean by standard pinout or alternative, unless you mean the two ways around that I mentioned earlier?
Top

You should be fine on the cable given its got that connector on it rather than the superseal one the later types use. Those have the centre pins swapped over on the 4 pin connector, but not relevent for you (cable is the same, but to use on KME/STAG the middle two pins are the other way round to the AEB setup thats all).

Its probabbly worth seeing if Richard or Simon come back with a suggestion as they know the AEB175 type ecus far better than I ever will do. The 3 pin type cables have been problematic on some systems though yours appears to be listed there so should work. It may of course still be the wrong software, though the markings on your ecu appear to match that software to me.

What version of windows are you using currently? Assuming that you are actually using windows at this point? You might get it working through emulation, but that throws a few more unknowns into the mix to deal with.
Top

This pic is a diagram for a simple interface assuming you have a proper serial port of a decent quality USB to Serial adapter. 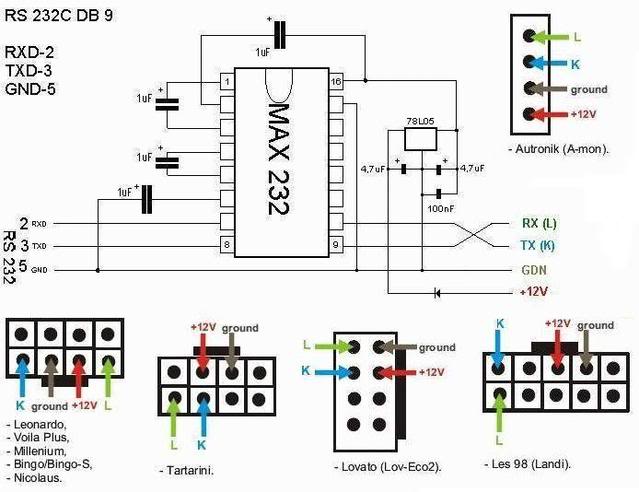 The pictures show the pin connections used by different manufacturers. The standard AEB175 is bottom left, marked Leonardo, etc. The only mention of Landi is for the old style Les 98 but that has a 10 way plug. The lead you have appears to be a simple USB UART, almost certainly confirmed by there only being 3 wires, and I've played with one on a system I didn't have a dedicated lead for and could never get it to connect.
96 Saab 900XS, AEB Leo, sold
93 Range Rover 4.2LSE, Lovato LovEco, sold
97 Range Rover 4.0SE, multipoint, sold
98 Ex-Police Range Rover 4.0, AEB Leo, daily motor
96 Range Rover 4.6HSE Ascot, AEB Leo, my spare