On the Thor engine the end intakes on each bank cross over between upper and lower inlet manifolds (to keep the intake tracts the same length on all cylinders). So if looking at the bunch of bananas on top it looks like the two banks can be easily identified. But, if you look at the lower inlet manifold you can see that what appears to be the end cylinders on each bank are actually for the opposite bank.
96 Saab 900XS, AEB Leo, sold
93 Range Rover 4.2LSE, Lovato LovEco, sold
97 Range Rover 4.0SE, multipoint, sold
98 Ex-Police Range Rover 4.0, AEB Leo, daily motor
96 Range Rover 4.6HSE Ascot, AEB Leo, my spare

If they are connected underneath, then thats better, but they might be a bit of a long run if its running around the ends.

The normal bank wiring on Nevo is 1-4 on one bank, and 5-8 on the other. Your injector timings in the screenshot to me, suggest you have them married up to the odd numbers on one bank, and even on the other. If the gas injectors match this (you have 1.3.5.7 on one lot, and 2.4.6.8 on the other) then it should be fine, though somewhere in there is a setting for the bank as well, as each bank has its own trim.

This is from mine - but mine has the wiring loom using 1-4 for one bank, and 5-8 for the other. You access this by the inj button on the righthand side 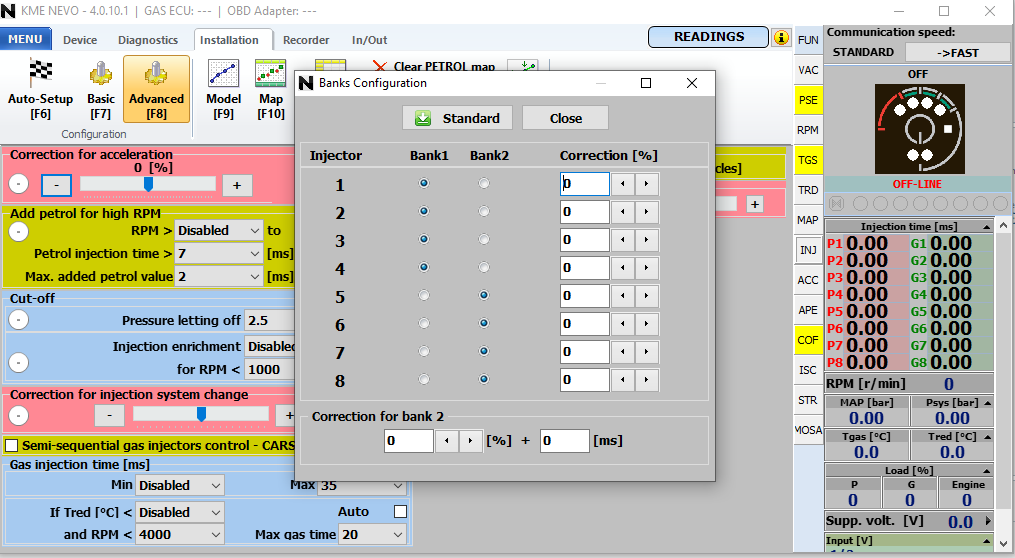 If the wiring doesn't match between petrol and gas injectors, you can be having fuel trim corrections applied to the wrong bank, which will then throw that bank out, in the meantime the adjustments to the trims will go further in the wrong direction on the first bank as its not seeing it change. Meanwhile the second bank goes in the opposite direction as its seeing the reverse happen. Same applies to the pipework if you put it into the top section without flipping it over to be correct, though at least that should be ruled out for now with what you've said above.
Top

Thanks Richard - I see what you mean.
Thanks Brian - I'm still being a bit slow on the uptake here. I will follow each hose through to work out which colour nevo leads are responsible for each cylinder. If it is odd/even then I'll change it to bank1 and bank2 so it matches up to lambda and trims. Keeping it easy to understand.

Hope to take a look at wiring tomorrow. Hope Brian is right and the connections to p7 are reversed. If not, I don't know how to explain it running on all 8 on petrol (unless lpg wiring shorted).
I will scope petrol signal for inj 7 and compare it with another. Then check colour codes. It was running on gas sp perhaps c7 was still on petrol?

Just need to get on and see what has been done and if the nevo survived.......
Top

There is only 2 ways it can be doing what your seeing. Either its reversed, or not connected at all to the negative side. Shorted connections would result in it not working on petrol. Unless the ECU is at fault, but at this point I'd think that was doubtful. Not sure what youd see on the positive side though.

I can definitely confirm if you have the two wires swapped over for the injector cut, that will do it as I managed to do just that.

Solid brown should goto the petrol injector, brown/black to the car loom.
Top

I think if the brown is shorted to the brown/black then it will always run on petrol. If either of the wires has come adrift - it wouldn't run on petrol (and I hope to notice it was running on 7). If the wires had always been reversed - would the installer have got it configured? Maybe something has been changed and the wiring messed up then?

Hope to see what I can see tomorrow.

It would, your right, but its unlikely that both are shorted together unless it was deliberate. I'm not sure if it could have been worked around in the software, maybe (Simon would know better on that front). Its possible to configure one cylinder to run on petrol and the rest gas though. Either way, your looking at having to investigate it and work out whats been done (possible its something thats been done later by someone besides the installer, and they don't know what they have done to it, particularly if they didn't have access to the software to see what was going on).
Top

With Nevo it doesn't really matter which ECU channels correspond to which cylinder numbers/banks as long as channel outputs match channel inputs (routing is correct). But if you want to set a bank trim you do have to know which channels correspond to which cylinder bank... If just for the bank trim you still don't need to set which channels are on which bank because you can set a trim for each channel, but if you do assign banks to channels you can use the global bank trim setting and if you want to set a pulse duration offset (in terms of set milliseconds rather than a percentage offset) you have to assign cylinder banks.

Injector breaks are done on the injector pulsing wire (so on the injector negative of this car and the vast majority of cars). If you connect to the pulsing wire but get the striped/unstriped wire mixed up the petrol injector readings will seem correct while running on petrol but will go to 0ms when you switch to gas, which will mean the gas injector on that channel won't pulse so you'll get a misfire on that cylinder when running on gas. If this happens it won't be long before the system sees the 0ms as an error that causes the system to switch back to petrol (unless the Hemi option is set and/or the 'error action setting' for missing petrol injector signal for that channel is set to 'do nothing'). If you connect the striped/unstriped wire to the none pulsing wire on a petrol injector the LPG ECU will either read 0ms or very high ms petrol injector pulse duration on that channel and you'll still get a misfire on that cylinder when running on gas. If striped and unstriped are connected to the pulsing wire and also shorted together then when it will read pinj correctly but when you switch to LPG the cylinder will get both LPG and petrol so (usually) there'll be a misfire on that cylinder.

If you want to test if striped and unstriped are shorted, unplug the LPG ECU from it's loom before checking the wires with a multimeter.

I have seen one Nevo loom where black with blue strip solenoids earth wire was mixed up with blue with black stripe channel 4 petrol injector break wire at the LPG ECU connector, this caused a constant misfire on cyl4 due to cyl4 petrol injector being kept open continually but I very quickly identified and sorted the loom problem. Cyl 7 channel petrol injector break wires are brown and striped brown, there are only 2 other brown wires - LPG injector channel 7 output and the rpm detection wire. You don't have to connect the rpm wire but if you do connect it (to a coil pulsing wire) it would allow you to use Nevo's firing order detection facility... using the firing order detection facility would be another way of checking which LPG ECU channels are connected to which petrol injectors because you could compare the vehicle's firing order to the detected firing order.
Full time LPG installer
Servicing / Diagnostics / Repairs to all systems / DIY conversion kits supplied with thorough tech support
Mid Yorkshire
2 miles A1, 8 miles M62,
http://www.Lpgc.co.uk
Twitter https://twitter.com/AutogasSimon
07816237240
Top
Post Reply
28 posts

Return to “Running a V8 on LPG”