I got mixed up my shutoff valve is separate from the reducer. I will check tomorrow find the make and see if it has a adjusting point. I googled a photo of one im assuming if I need to increase pressure I turn the adjuster clock wise
I think my old shutoff valve is where it has a leak, I have a new one that I will fit tomorrow.
Top

There is usually a filter in the shutoff valve - it could be a case of replace the filter and o-ring would fix your leak if thats where its leaking, equally could be a bad pipe connection causing it. Depending how its been connected, you might need an olive to replace the one there if it still won't seal and seems to be leaking from the pipe.

On the adjuster, easiest bet is to try adjusting it with the laptop connected and watch which way the pressure moves towards. Don't get too carried away with it though as some will pop out if you go too far.
Top 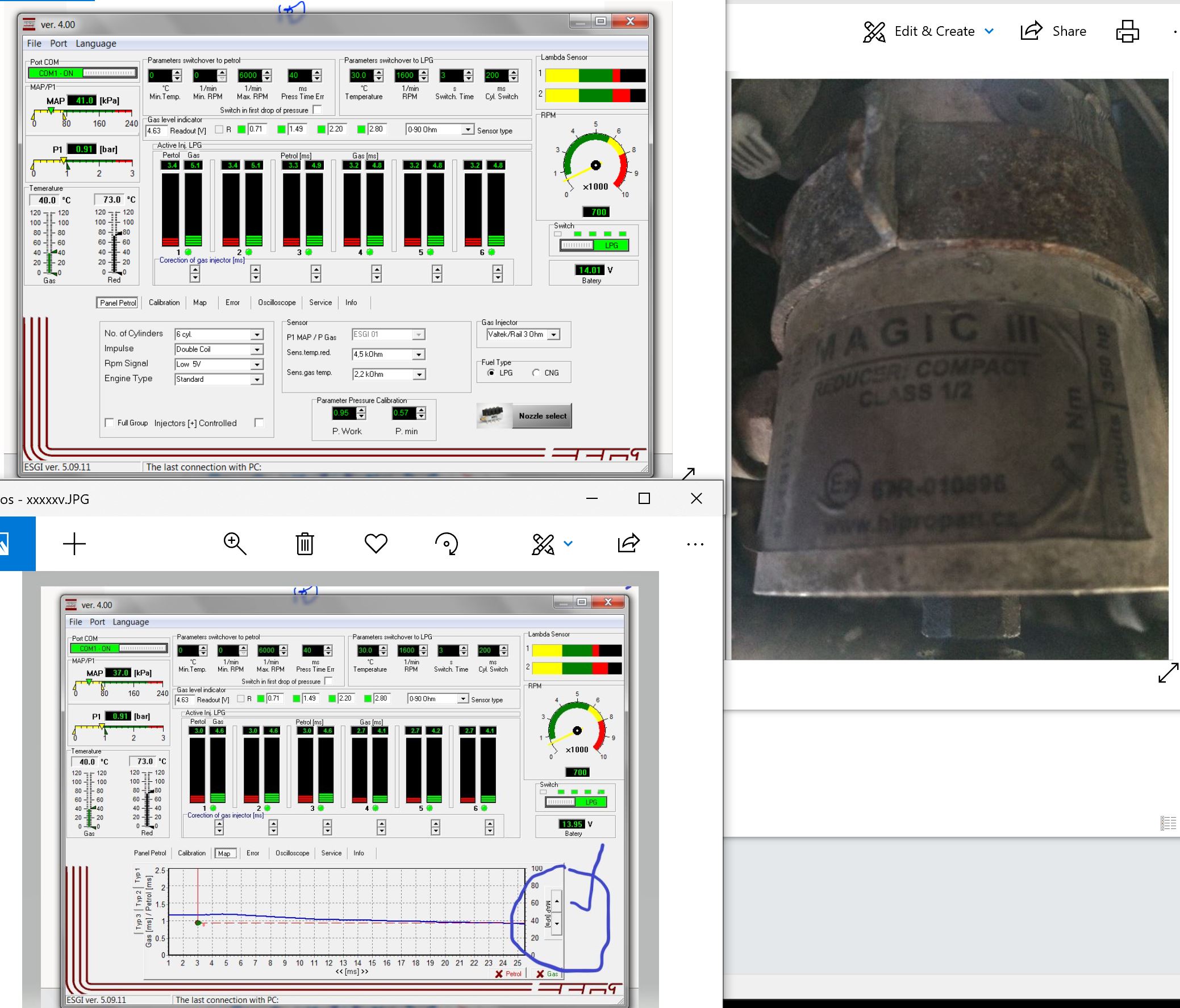 hi
I swapped the shutoff and solenoid which stopped the leak. I Checked the reducer(MAGIC III) the Allen key would only move clockwise half a millimetre it will easily go anticlockwise.
I checked the pressure setting and it is now 90/92 bar. Not sure if fixing the leak improved the pressure or turning half mm on the reducer?
I set p work 0.90
p min 0.45
After calibration the p work is now 0.95 and p min is now 0.57 ?

when I set the p work p min do I calibrate or just exit?
on the image showing map settings can I use the up arrow to adjust the map above one?
Top

LPGC sorry I missed reading your post, I will try in the morning turning the allen key anti clockwise
Top

If the leak is on the entry side to the reducer it won't make any difference - its stepping down from approx 8-10 bar when it goes into the reducer, and it can have only been a very small leak.

If you auto calibrate it will wipe out any settings you've changed on that bit, I think Simon was suggesting to just change those settings and exit.

I've not used Esgi, but on some software you have to hit the return key to get it to save a value after entering it as well, else it doesn't save it.
Top

Anticlockwise increases pressure on Magic3 reducers. Best to talk about degrees of rotation rather than turning X mm, at the lower end of pressure adjustment it can take a full turn of the allen key to make much difference to output pressure. Also check pressure again after a drive that's long enough for the engine and reducer to have been fully warmed for 10 mins as sometimes the pressure drops a little when the reducer is fully warmed up and you don't want much less than 0.9bar when it's fully warmed.

HI
ON THE MAGIC3 there are two or I can see two allen key adjusters, you can see one on the pic I posted. I adjusted the one in pic and started to smell gas (I retightened)
I adjusted the other but no change in pressure.
am I adjusting in the right place?
Top

No you're not adjusting in the right place. You just unscrewed a blanking plug - gas outlets and pressure take-offs can be re-positioned around the circumference of the MJ3 reducer by swapping positions with blanking plugs, there are around 5 blanking plugs around the circumference. Have a better look around it and use a mirror if you have to - there is only one pressure adjusting screw on the majority of reducers including MJ3's, it isn't in a similar position to blanking plugs, it is at the opposite end of the reducer to the gas inlet not on the circumference. If you've previously slackened blanking plugs there's no wonder you could smell gas, make sure they're all quite tight, you don't have to over-do it because they're sealed with little O-rings.
Full time LPG installer
Servicing / Diagnostics / Repairs to all systems / DIY conversion kits supplied with thorough tech support
Mid Yorkshire
2 miles A1, 8 miles M62,
http://www.Lpgc.co.uk
Twitter https://twitter.com/AutogasSimon
07816237240
Top

Its at the very top end of that picture right in the middle.
Top

HI
I added a screenshot

Had a customer visit for diagnostics on his LPG system (fitted elsewhere) today, symptoms of sometimes beeping instead of switching to gas as though it had run out of gas, sometimes running on gas but poorly. The installer of the system listed the ECU as Stag but it has an ESGI ECU. I diagnosed the problem as broken ECU, on channel 2 it reads either zero ms pinj or very high pinj no in-between, I initially thought the petrol injector break wiring might be wrong (striped and none striped swapped or connected to positive instead of negative) so swapped wiring but the fault remained, petrol injector wiring couldn't be shorted as it ran well on petrol so was looking like the ESGI ECU was broken, to confirm a broken ESGI I swapped petrol break wiring input channels but the fault remained on channel 2 so the ECU is definitely broken. I have a 4 cyl ESGI ECU here but not a 6 cylinder ECU and the owner doesn't want to spend much on fixing it by fitting a new same make ECU or second hand ECU of different make (which would involve a complete re-wire and different map sensor).

So, would be good to get hold of a second hand ESGI 6 cyl ECU. I know yours is broken (relay, but other than the relay it seems to work?), I'd have to wire in a separate system to control the solenoids (or swap relay from his broken ECU to yours, his relay is working). Wouldn't be worth much to him but would buy if price was low enough.

pay postage and you can have it
Top

Thanks!
I sent you a PM at the same time as my last post, we could use PMs to discuss how I pay you for postage and where you post it to?
Will want to give you a few bob for your time sending it.
Cheers, Simon
Full time LPG installer
Servicing / Diagnostics / Repairs to all systems / DIY conversion kits supplied with thorough tech support
Mid Yorkshire
2 miles A1, 8 miles M62,
http://www.Lpgc.co.uk
Twitter https://twitter.com/AutogasSimon
07816237240
Top

Many thanks to @superkp for sending me his old slightly dodgy ESGI 6 cylinder ECU for free which I received yesterday.
We've swapped a few PMs, I will be paying him for the postage plus a bit on top that he wants to donate to PDSA.
Cheers superkp
Simon.
Full time LPG installer
Servicing / Diagnostics / Repairs to all systems / DIY conversion kits supplied with thorough tech support
Mid Yorkshire
2 miles A1, 8 miles M62,
http://www.Lpgc.co.uk
Twitter https://twitter.com/AutogasSimon
07816237240
Top

Return to “Having Problems ?”